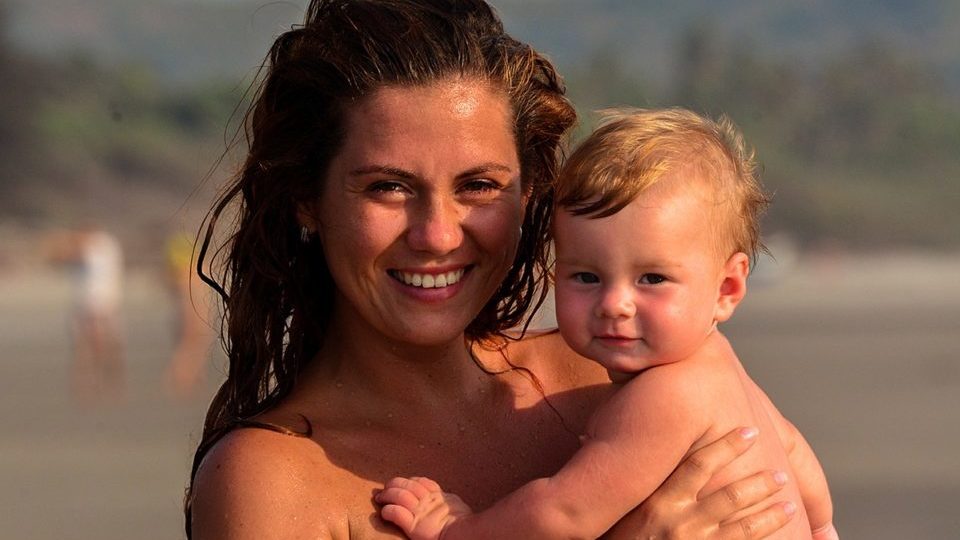 The Science, Magic and Nurture of Planet-Wide Baby Holds

I have only recently come across ‘The Hold’ promoted by Dr Hamilton, a paediatrician in Santa Monica, California. It has been seen by many people, but I missed it.

The Hold is very similar to a practice I learnt from Amazonian indigenous people during my first pregnancy. This is now one of our Birthlight ‘Relaxed Baby Holds’, on land and in water. It can be observed all over the world, particularly in Asia, as a traditional way of holding babies. But new parents in world cities seem to need to be taught how to nurture their babies with calming holds. Dr Hamilton developed The Hold in his clinic to soothe babies after examinations or treatments made them cry. He seems to have developed this hold empirically rather than having learnt it, which is interesting.

Leen Heusdens, midwife and trauma therapist in Holland, recently expressed her concern about “The Hold” after I posted one of Dr Hamilton’s You Tube videos in my excitement of recognising similar features to our Birthlight relaxed forward-facing hold.

We engaged in an exchange about the calming effect of ‘The Hold’ and whether it could be compared to a ‘freeze’ in a helpless response of the baby. Just like when a mother cat (or a human) holds a kitten by the back of the neck and they go limp and ‘freeze’ in a superb quiet after climbing up the curtains or squealing. This got me wondering some more about how this hold works and whether the calm it produces might have a negative side as a ‘freeze’ effect. After watching the video demonstrations again, here are a few thoughts to stir debate with Birthlight teachers who may show the relaxed forward-facing hold routinely to parents.

Leen is right in saying that some aspects of a freeze are there. The babies on the videos go quiet and kind of ‘limp’ when held by the Doctor (by the way it would be good to see how the parents pick the practice up, as we only see the masterly demos).

The Hold is taught in 4 clear points:

Several practices in combination produce a calming effect. 1-2 crossing the midline with the arms (an effective simple practice that is the cornerstone of calming very young babies as shown to parents in the Brazelton NBO). As far as I am aware this is not done in the traditional forms of The Hold, but it is part of baby swaddling practices that are widespread with different modalities across cultures.

Point 3. At Birthlight, we call this ‘seat hold’. Placing a hand under a baby’s seat is comforting, with a soothing effect on the baby’s central nervous system through the base of the spine. If the baby is held upright, however, this hold can have a stimulating effect, as used in Russian gymnastics encouraging babies to do a sitting balance on a parent’s hand. At Birthlight, we only use this stimulation later, when the babies have gained head control and spontaneously initiate an upright stretch. Some French psychoanalysts objected to ‘seat hold’ because it might warm up babies’ genitals. But as Dr Hamilton puts it, ‘grasp diaper area’. There is actually no need for grasping, seat support on an adult hand is quite secure.

Point 4. The ‘rocking’, perhaps more like a ‘jiggle’. I like Dr Hamilton’s little circles, we do this too. On the videos, it looks like ‘jelly on a plate’. It’s quite vigorous. In time we have had a great deal of discussion about whether this could be harmful if pushed too far into ‘shaking’ (as the ‘shaking syndrome’ in baby abuse). For this reason, our ‘jiggles’ are slower and gentler. We also teach “little drops” that most babies respond to with pleasure. This is done by parents bending their knees slightly a few times while holding the baby (by the way this also has a calming effect on the parents!). Without ignoring the ‘shaking’ risk, parents benefit from being shown that babies like being moved by a human action rather than by a mechanical device such as rocking cradles or cots that jiggle babies to sleep at the push of a button.

Does the 45 degrees angle matter? Yes. It can be a little more or less, but it definitely needs to be an oblique position. Horizontal only works if the baby’s body rests fully on the parent’s arm (as in “Tiger in the Tree”). Vertical only works if the baby is nested close to the parent’s chest/shoulder, with one hand of the parent supporting the baby’s seat and the other supporting the head (as in “Shoulder Hold”). Due to cultural conditioning by conventional images of babies held in arms (“Cradling Hold”) parents tend to resort to this lovely hold, perfect for eye to eye contact and verbal communication, when babies cry. But this is precisely when ‘cradling’ does not work so well: parents get more and more distressed as they try and rock their crying babe in arms.

What is it about the face down position that calms? If people all over the world, not just in the Amazon or in modern baby clinics, are using The Hold, there must be something universal about it. Something physiological. In his 4 points Review, Dr Hamilton does not mention how he supports babies’ heads under their lower jaw with the thumb and index finger of his other hand. (By the way we recommend that parents use their left hand to support the baby’s seat if they are right handed and the right hand if they are left handed).

This support is what made Leen react, because it may trigger a ‘lock’ in the baby’s posture leading to a ‘freeze’ response. At Birthlight we have had lots of internal discussions among tutors and teachers about the support of the baby’s head in this outward facing hold. Pressure on babies’ lower jaws acts on the Trigeminal nerve, the largest of the cranial nerves. This is a very complex nerve that extends not just to the face but to other parts of the nervous system. I would like to know more about this in relation to a ‘freeze’ reaction, perhaps in relation to Stephen Porges’ research on the polyvagal system. Holding the baby’s lower jaw may also interfere with the Tonic Labyrinthine primitive reflex, impeding movement of the neck in relation to the ‘seat hold’.

For these reasons, we have abandoned the practice of holding babies under the lower jaw (1). For the forward-facing relaxed hold, we have long promoted a progression from “safety hold” (securing the baby’s arm between thumb and index finger while the parent’s lower arm creates a nice “banister” for the baby’s chin to rest on). This is an adapted version of what I learnt from Amazonian people. As head control is gained, the “safety” grasp (also used for safe support in the unlikely case that the parent’s seat hand might slip) is replaced by an open hand support under the baby’s chest. Then the hold is truly relaxed and so is the baby. The base of the skull, where the cranial nerves transit with so many implications for infant development, is kept free while the baby’s head is safely supported.

The exchange of posts about The Hold made me think some more about Cultural Fusion. We cannot just take traditions from other parts of the world at face value. What works for Amazonian rainforest people, who are very nimble, body-aware and used to handle babies from childhood, may raise unsuspected issues when conveyed in a more rigid way to western parents. As much as possible, we need to understand the anatomy and physiology of practices that humans have either transmitted down generations or ‘rediscovered’ empirically from babies’ responses. Baby Calming is a complex cultural affair. Think about the rocking ban imposed on European and North American parents during the first half of the twentieth century and how it has been progressively re-instated as a beneficial baby calming practice. There are strange pendulum swings in the history of baby care.

Recent studies looking at the neurobiology of culturally common maternal responses to infant crying (2) are concerned with elucidating the foundations of core parenting practices when infants are distressed. We now know that holding babies actually affect their DNA (3). Is there a continuum of response from calming to ‘freeze’? or is the onset of a ‘freeze’ response sharply clearcut? There do not seem to be clear answers to these questions, or I may not have identified them yet. If anyone reading this piece has relevant information, this would be very helpful. In the video that rationalises why babies are calmed by ‘The Hold’, commentators mention both the possibility that the baby recalls proprioception in the amniotic fluid and, interestingly, that the baby might welcome a stimulating change of orientation from horizontal to oblique, with a different vista. This conjures up my wonder at Amazonian babies’ calm alertness while being carried for hours in precarious slings on very rough terrain, nursing and sleeping when needed along the way. In the same way that mothers knew when the babies needed to empty their bladder or bowels and just held them a little distance away for the purpose (most often), they -and fathers and siblings too – had an amazing register of holds and transitions between holds that we westerners need to learn from, adapt and understand better. ‘Holding the Baby’ may turn out to be one of the most exciting challenges for Cultural Fusion.

Find out more about Birthlight’s constant refining of ‘Relaxed Baby Holds’
Relaxed Holds on land are shown in detail in the Combined Birthlight Nurturing and Baby Massage Course.